Lord Garmadon is the Main antagonist of the series and the Ninjago series. he is the supreme leader of the Evil ones and the Doom Clan. he is the Biological Dad of Finn and Lloyd

He just reveals himself in a unknown location. he just sits in his evil lair and gets reports from his minions. his early history said that he was a star warrior once before he betrayed them for world domination and became evil 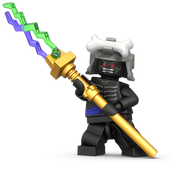 Lord Garmadon
Add a photo to this gallery
Retrieved from "https://super-mario-bros-dx.fandom.com/wiki/Lord_Garmadon?oldid=4164"
Community content is available under CC-BY-SA unless otherwise noted.